Christmas Day 1979, a family occasion at The Old House, roaring fire in the hearth, traditional fare consumed, contented parties digesting same attempting the maestro’s Jumbo, with the perpetrator in his lofty armchair bemused in the corner of the room.

“What’s 16 Across?” raised eyebrows from the corner.

“Who’s ‘Tied up in the theatre’, nine letters?” ventured Mad Alice, my recently espoused, and greeted as such by the cruciverbalist earlier, when I said to him, “Father, can I introduce Celia.”

“Think ‘what’ rather than ‘who'” came the dry response from the Caterpillar.

“What sort of theatre, and what’s tied up?” mumbled the muse.

“Wouldn’t it be a good idea if I wrote a computer progam to do what you’re doing?” I interjected.

“You’re welcome to try” he sniffed… but the idea persisted.

Later, in his study eyeing his first Book of Times Crosswords with its Penguin Union Jack cover. “Mind if I borrow this? I’ll let you have it back when I come back at half term.”

Later, New Year 1980, back at our teacher’s flat, overlooking Victoria Park, in Hackney, found me rigging up my new Sinclair ZX80 just that day purchased and inserting 1 Across: Two balls at snooker – looks as if one’s badly beaten (5,3,4) Solution: BLACK AND BLUE into my first data file.

The rest as they say, is history, with my father, Edmund Akenhead’s wisdom for ever ringing in my ears! ‘Our aim is to entertain, rather than drain’. 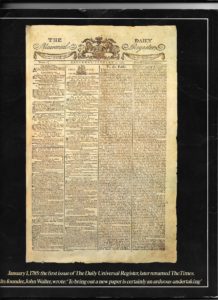