Epilogue to The Tempest spoken by Prospero

Prelude to the Prologue to King Henry The Fifth

Prologue to King Henry The Fifth, Act 4 on the Eve of Agincourt and dedicated today to the good people of Ukraine and Russia

To A Mouse, on turning her up in her nest with the plough, Winter, 1785 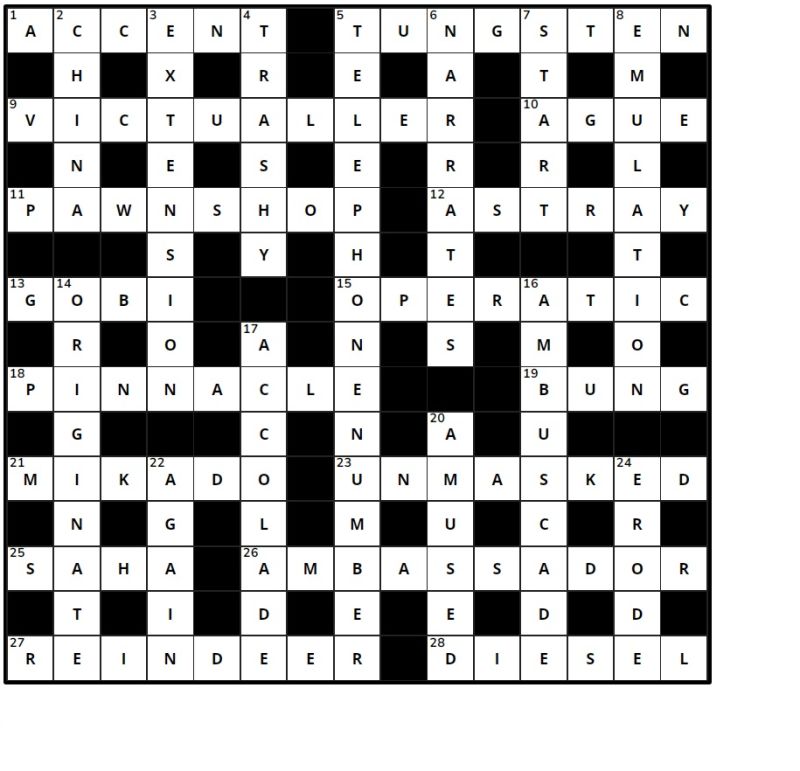 From The East African collection – Volume 1, Puzzle No. 23 – crossword by EA (and DA) published originally in the East African Standard on Saturday, 5th November 1960

H (twice) for Help appeals for Ukraine refugees
‘The time has come’ the Walrus said, to wrap this memorable tribute up!
Note: henceforth just credit for correct solvers, (my own input excepted), courtesy of limited time and space!
Thanks to all!

David Akenhead CEO Akenhead crosswords under licence from Times Newspapers UK Limited.
At www.crosswordsakenhead.com our following stands at over 105,600

Across:
1 Breaking ten after a double century in a manner of speaking (6) M. Rolfe
5 Talker, we hear, has gun of metal (8 ) B. Dalliston/M. Rolfe
9 Call virtue perhaps a provision merchant (10) S. Saxena
10 A guest who’s lost his way’s got the shivers (4) S. Allen
11 Uncle’s inaccurate statement of how chessmen move (8 ) J. Griffin
12 Off course like a bearer of dishes (6) B. Patra
13 Desert advertises local line (4) DA Go BI (British India Line)+ I. Morrison
15 Pertaining to musical drama a long time in the eye (8 ) B. Patra
18 Hostelry in place maybe of the highest point (8 ) V. Perumal
19 Bath product takes note of a stopper (4) B. Patra
21 Wandering minstrel’s authority (6) S. Saxena/M. Rolfe
23 Minus domino (not requested if minus a thousand) (8 ) M. Charlu/ S. Venkatesh
25 Gob-stopper has a crazy answer (4) DA/EA Saha (has a*) Arabic gob-stopper! No alcohol permitted! Toast to good health!
26 A thousand fish take tortuous road of the diplomat abroad (10) M.Charlu/M.Parasuram
27 He’s a beast to err strangely holding in the river (8 ) V. Perumal
28 Type of locomotive that brings one into Leeds somewhat deviously (6) R. Santakumar

N.B. Link below to Volume 1 on my website and my new program offering Help or No Help, (recommended for experienced solvers), but the other is there for newcomers to cryptic crosswords too – DA
https://lnkd.in/gket9Uv6
The Times